In late June 2018, TUED brought together UK unions and a number of key allies for the latest in a series of discussions aimed at further developing trade union approaches to taking energy in the UK back under public, democratic control. These discussions took on fresh urgency following the UK Labour Party’s commitment to reclaim the energy system back to the public, first made in its May 2017 election manifesto, For the Many, Not the Few.

The meeting, which took place June 28-29 at historic (and union owned) Wortley Hall near Sheffield, England, brought together representatives from key UK unions—GMB, UNISON, Unite the Union, PCS, TSSA, BFAWU, NEU, and the TUC—as well as policy and movement allies. Unions from Norway and Greece also attended, as did energy democracy advocates from Barcelona, Brussels, and Berlin. A full list of attendees is here. The program is available here.

The Labour Party’s election Manifesto had pointed to the failures of electricity privatization, to the problems of energy poverty, and to the need to honor the UK’s climate commitments and put the UK on course to meet 60% of its energy needs by zero-carbon or renewable sources by 2030. It also committed to “take energy back into public ownership to deliver renewable energy, affordability for consumers, and democratic control” and called for the creation of “publicly owned, locally accountable energy companies and co-operatives to rival existing private energy suppliers.”

The Manifesto commitment was also endorsed at the UK’s Trades Union Congress (TUC) in September 2017, when the congress voted unanimously to support the Party’s position on energy, climate change, and just transition.

There’s a lot of programmatic work that needs to be done on this question. There’s a lot of disagreement among different unions about various energy sources. But what we have at the moment is a political opportunity to rally behind the idea of public ownership, which has the potential to shift the narrative across Europe. We have a situation now where the public narrative is rising, not just around energy but around other public services as well. This is a global phenomenon.

Rebecca Long-Bailey, Labour Party Shadow Secretary of State for Business, Energy and Industrial Strategy (BEIS) presented the current thinking within the party on how to realize its energy and climate commitments. The session provided an opportunity for those participating in the meeting to discuss the party’s current policy direction, which focuses on establishing a number of regional public energy companies. 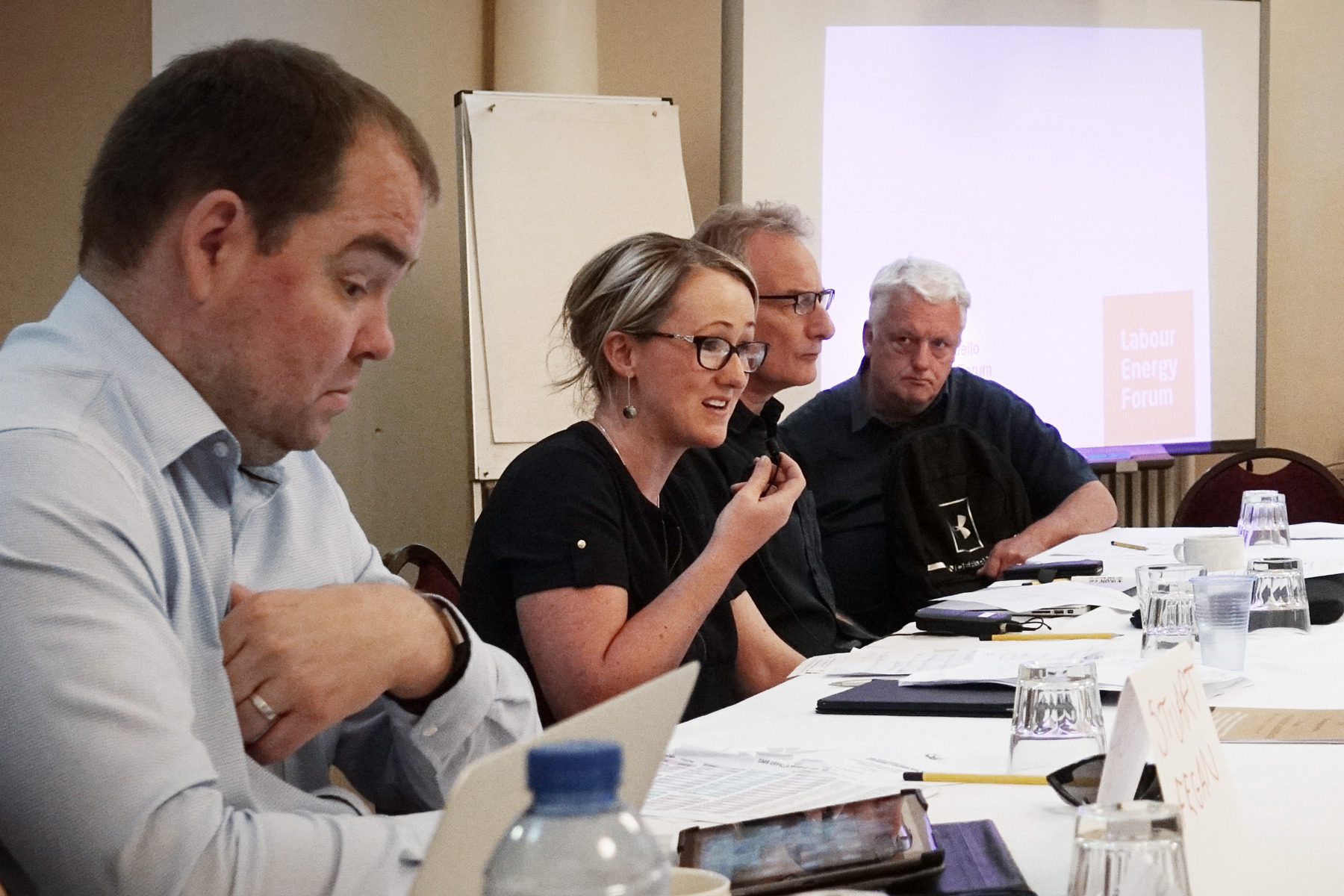 Building on UNISON’s response, and mindful of the current positions on public ownership of GMB, Unite the Union and PCS, a TUED discussion document made the case for establishing a new national public entity that would encompass generation, transmission, distribution and supply. See: All, or Something? Towards a “Comprehensive Reclaiming” of the UK Power Sector.

Other important discussions covered issues of the overall energy mix, the challenge of meeting winter heating needs, and replacement fuels for the transport sector. John Storey of Unite the Union outlined key issues arising around storage technologies in the face of an increasing reliance on renewable generation, and highlighted the crucial issue of jobs estimates, emphasizing the urgent need for more detailed work in this area given wide variation in how these are defined and counted.

Matthew Lay of UNISON and Stuart Fegan of GMB provided information on the potential of hydrogen to play a role in the decarbonization of domestic heating systems, since most of the gas burned in the UK is not in the power sector, but in people’s homes for domestic heating.

TUED’s John Treat presented the most recent data on UK transport emissions—now the leading source of GHG emissions in the UK—as well as on electric vehicle sales, drawing attention to their marginal market position and limited potential to reduce transport-related emissions.

The meeting was also addressed by Costas Lapavitsas, Professor of Economics at the University of London’s School of Oriental and African Studies (SOAS) and former member of the Greek Parliament for Syriza. Lapavitsas offered reflections on the challenges likely to face any efforts to regain public, democratic control over energy as long as the UK remains part of the EU single market, and on what could change with the UK’s leaving the EU. His reflections drew from the arguments and observations made in this May 2018 article published by Jacobin magazine, “Jeremy Corbyn’s Labour vs. the Single Market.” 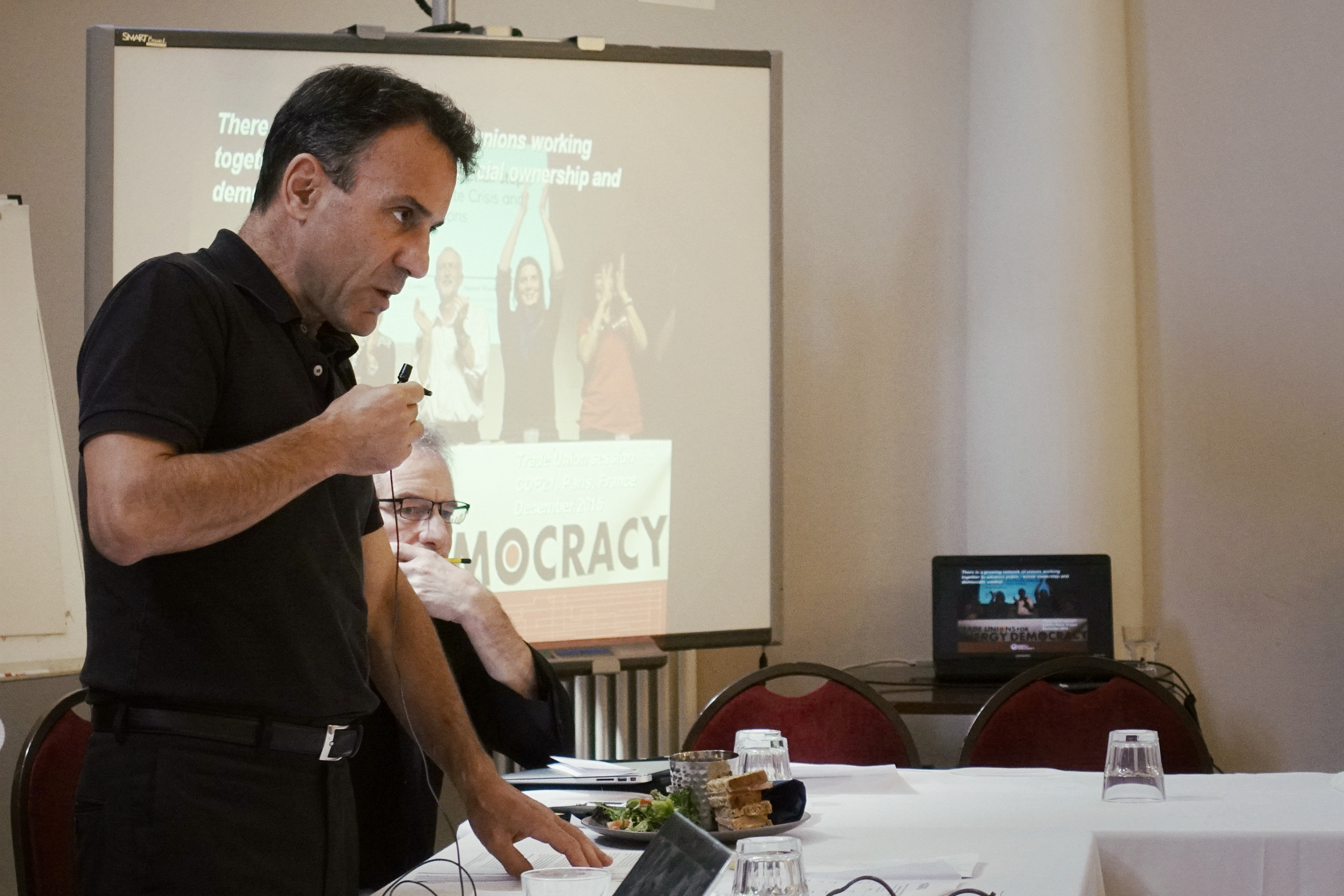 Discussions during the two days were frank and constructive, and those present seemed to share a sense that the group made a very real and important step forward in efforts to fulfill the Labour Party manifesto commitment to reclaiming energy to public control.

TUED would like to extend special thanks to Marlis Gensler and the Rosa Luxemburg Stiftung—Brussels Office, and to Bill Adams of the TUC Yorkshire & the Humber, for vital support in making the meeting both possible and successful.

RT @SteveT_Unite Fantastic start to the #ETFCongress in Budapest .. deliberately chosen to set our industrial and political agendas while shouting out for equality, inclusion and diversity in society! #Solidarity @ETF_Europe @ETFYouth @etfaviation pic.twitter.com/KR4et3eab1

RT @SteveT_Unite On #MayDay2022 we celebrate our victories and learn from our defeats, stand in #solidarity with those fighting injustice and alongside those desperate for peace, we are internationalists, we seek to inspire, organise and mobilise for a better world #solidarity

RT @SteveT_Unite Another heartbreaking loss of life, loved ones and friends in the heart of our community … my thoughts and sympathies are with all impacted right now ⁦@CambPeckLab⁩ bbc.co.uk/news/uk-englan…

RT @ITFglobalunion ❌ No consultation. ❌ No respect. 💪 Not on our watch. Hope you enjoyed our light show on Thursday, @POferries👇 pic.twitter.com/DXiCNsboot

RT @MarshadeCordova Proud to support @unitetheunion Going for growth beyond 2022 strategy which outlines key steps for the Government to take to secure and deliver a greener, sustainable and more self-sufficient future for the aerospace sector as it recovers from the pandemic. pic.twitter.com/OuLKGm6OLS

RT @SteveT_Unite A great launch today at Westminster of @UniteManufactur strategy for aerospace - ‘Going for Growth’ - an ambitious plan to protect the sector and support future R&D, investment, skills and good, well paid, unionised jobs as we move towards #JetZero unitetheunion.org/campaigns/p… pic.twitter.com/jKoE5ezknJ